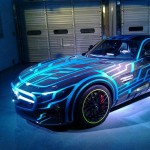 We’ve been seeing some speculation recently for Kamen Rider Drive’s upcoming summer film, primarily in the form of information and images for the exclusive Drive Type for that film. Today however we have some solid info! Tweeted out by the official Kamen Rider Drive twitter account is not only the title of the film itself, but a new vehicle exclusive to it! The film will be titled Kamen Rider Drive Surprise Future, and while we don’t have more plot details beyond that we can likely infer a few things.

The same tweet also revealed the existence of the next generation Tridoron for the movie, the NEX Tridoron! The NEX is a special vehicle indeed, while the standard Tridoron is based on the 1992 Honda NSX, the NEX is in fact a 2016 Mercedes AMG GT! Could this new vehicle be related to Drive’s new Type? Or another character entirely?

We’ll keep you up to date as more information on the summer 2016 film Kamen Rider Drive Surprise Future becomes available!