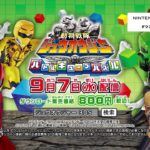 Rather than having it be a beat’em up like past games, Battle Cube Puzzle as the name suggests will be a puzzle game with a turn based RPG mechanic and the main six Zyuohgers being playable. Mech battles will play a part of the game, though it seems like the mechanics for that remained unchanged from previous titles. Other features include story mode, survival mode, puzzle mode, and of course: 5 player multiplayer. Battle Cube Puzzle will be released September 7th for 800 yen.

The first preview for the game’s been released onto Youtube, you can check it out in the box below: