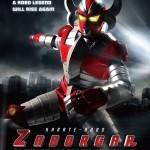 For those who don’t know, back in September, the movie, Karate-Robo Zaborgar (which is a remake of the old tokusatsu series Denjin Zaborger) was recently released on DVD and Blu-ray over here in the states, with the original release of this movie coming out in Japan in 2011

Well for those wanting to check out out, it is now availible for streaming on Netflix! So if you want some hilarious tokusatsu action to watch, go check it out!