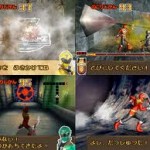 As reported by Silconera, we might be getting a game based Super Megaforce continuing the trend of yearly Power Rangers video games

The game is described as having on foot segments as well as Megazord battles so it seems feasible that game will reuse the same engine from the Megaforce game released last year.

Seventh Chord will be the ones behind this game in our fandom, they’re known as the makers of All Kamen Rider: Rider Generation and Kamen Rider: Travelers Senki.  Supposedly, we’ll see the game released  this Fall.