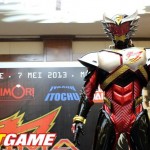 A new original Toku series, BIMA The Garuda Warrior is set to premiere in Indonesia on June 30th.

But what makes BIMA interesting is that it appears to be officially backed Ishimori Productions with merchandise provided by Bandai.

BIMA the Garuda Warrior tells the story of Ray, a young man from Earth chosen to protect the Earth from an evil named VUDO, whom is out to steal Earth’s natural resources

A trailer for this new show has just been released and can be seen in the link below:

Thanks to Tokunation member ComicGuy89 for the heads up!