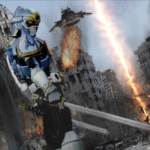 If you’ve been to the last couple Official Power Morphicons then you’ve no doubt seen the folks from Fujiyama Ichiban – a tokusatsu web series on YouTube created in the United States by former staff of Super Sentai from Japan and Big Bad Beetleborgs from Saban Entertainment.

Their next goal – to bring about a feature film with a theme geared towards adults! Joining the team of Fujiyama Ichiban is Michi Yamato. You may not know him by name but you’ve likely seen some of the series that he’s been involved in – various Kamen Rider and Super Sentai series including Bioman and Space Sheriff Gavan. Upon moving to the United States, he joined the team of Saban’s Masked Rider and Big Bad Beetleborgs, and has since done work on such big films like Hugh Jackman’s The Wolverine.

On the design team for the suits is Kenichi Muraeda, known for his work on the Kamen Rider spirits manga as well as designer for Kikaider: Reboot.

A number of other individuals with histories working with the Super Sentai and Kamen Rider series are involved, from stunts to costume and prop making. VFX contributors include individuals who have worked on movies such as Harry Potter and Transformers. Michi Yamato states that while working for TOEI or Saban there were rules they had to follow – no stabbing, no blood, and no kicks to anywhere but the chest. With this, a realistic tokusatsu hero can be born with fight scenes that make more sense to the modern adult.

There are a number of great rewards you can choose from. The project is seeking a grand total of $137,000 USD in order to meet the costs of pre-production and post-production. Michi Yamato has commented on everything from why he wants to do this to why he’s seeking that amount of money and a breakdown of where all the funds would go.

Do yourself a favor and check it out – click here to see the Fujiyama Ichiban Ultimate Kickstarter page! If you’ve seen their stunt shows at the Official Power Morphicon then you know what amazing things they can do! Support if you can and best of luck to the Fujiyama Ichiban team!