Articles Related to Heisei VS Showa 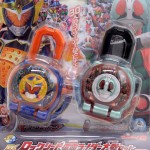 With the Showa VS Heisei movie currently in theaters in Japan, it’s the perfect time to take a look at the tie in toy: The DX Kamen Rider Taisen Lock Seed set!

Both Seeds are more or less the same; they’re capable of cycling through the names of each Rider series. The showa set goes from Ichigo to J before repeating the cycle while the Heisei set one from Kuuga to Gaim.

k2eizo of youtube provides the video of the set, you can watch it below:

Shoutouts to board member PkmnMstr for giving us the heads up! 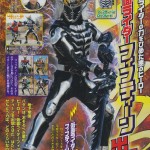 Additional scans of the up coming Heisei VS Showa Kamen Rider movie have surfaced. The new images reveals the villain for the film...Kamen Rider Fifteen! While Fifteen is a Gaim Rider, the interesting thing is that his Lock Seed doesn’t seem to be based on any kind of fruit but instead resembling a skeleton.

Other scans have revealed new Decade Arms for Gaim and a Fourze Arms for Fifteen based on whom seems to be holding a weapon based on the Barizun Sword of Cosmic States.

Additionally, the scan finally reveals some details about the Super Sentai portion of the movie, show casing that Tokkyuger and Kyoryuger will be making an appearance 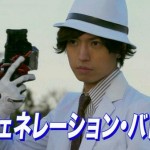 Toei finally released the first trailer for the Heisei VS Showa Kamen Rider, the latest all Rider cross over epic film.

Along with showcasing the return of Hiroshi Fujioka as Kamen Rider 1, the trailer also reveals a few more familiar faces that will be returning to the big screen.

First, Masahiro Inoue will once again be reprising his role as Kamen Rider Decade and Shunya Shiraishi will be coming back as the ring bearing Kamen Rider Wizard! You can see the trailer in the box below: