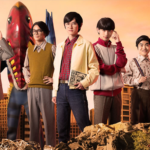 Kaiju Club is a new drama series that was just recently announced, the show is set in the 1970s and is about Ryota(Played by Kenta Hongo) and his club members as they discuss the very shows they are dedicated and passionate about, the show is inspired by an actual club that existed around that time frame.

The drama will begin airing in June on Japanese Networks MBS and TBS, the show will run for four episodes. A teaser for the show can be seen on the official website, make the jump here to check it out!