In the past week we’ve received a lot of new information about Kamen Rider Movie Wars Ultimatum, this seasons Kamen Rider crossover film. Now we have our first real look at the movie!

Credit: KamenRiderOOO of the Tokunation Forums! 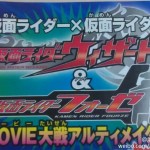 Fresh off the unveiling of Kamen Rider Fourze and Wizard Movie Wars Ultimatum yesterday we now have confirmation of it’s writing staff! Returning to write the Fourze portion of the film, set 5 years after the series end with Gentarou as a teacher at Amanogawa, is the series head writer himself Kazuki Nakashima! Of course this would be unsurprising wouldn’t it?

However the big reveal here is that Wizards’ head writer Tsuyoshi Kida will NOT be writing the Wizard portion of the film. Kida is best known for his beautiful work writing the first 29 episodes of Kamen Rider Hibiki before the series had an abrupt shift and for better or worse Kida was replaced with Toshiki Inoue. Many fans had hoped that Kidas’ attachment to Wizard would bring that same flare and originality to the series. So far it has.

However the Wizard portion of Movie Wars Ultimatum will in fact be written by Yoshio Urasawa of such sentais as Gekisou Sentai Carranger and Bakuryu Sentai Abaranger! How does this revelation make you feel about the film? Is this a smart decision on Toei’s part? What can we expect from Urasawa who has never written for Kamen Rider before? Join TokuNations discussion on the subject!

Further scans from the magazine also reveal that the movie will be set five years after the end of Fourze, the return of Kamen Rider Nadeshiko and the guest appearances of Sanagiman from Inazuman and the magical girl Patrine from the series Pretty Mask Poitrine!

With Kamen Rider Fourze bowing out this weekend to be succeeded by Kamen Rider Wizard, many people might already be missing the rocket-headed, friendship loving hero and the Kamen Rider Club of AGHS.

But fear not – Kamen Rider’s Movie War webpage updated today with a new logo featuring both Wizard and Fourze, announcing a new film featuring the two due in December!

We’ll bring you more news as it comes, along with weekly discussion of Kamen Rider Wizard as it airs. But it the meantime, it looks like space time isn’t over just yet! 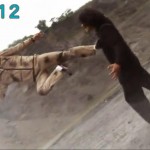 It is either a time to rejoice or a time to say your teary-eyed goodbyes because the contraversial Kamen Rider Fourze has officially come to an end.

We say “contraversial” only because the fandom seems to be split in half on Kamen Rider Fourze – half dislike it because of the goofiness and seemingly unimportant but always constant background cast of characters, while others absolutely love the relationships that have been built and get sucked in to the emotion when these characters influence the story or our main hero.

Curious what happens? Did Gentarou and Ryuusei manage to defeat the final two Horoscopes and save Japan from the Dark Nebula? What about Kengo … is he really gone forever? Will Ryuusei and Tomoko ever become a couple? And is there anyone out there that can take Miu away from Shun for good?

All these questions are answered in the final episode, “Youthful Galaxy”. How awesome was the episode? Check out the screen grab we took of Kamen Rider Meteor aka Ryuusei battling Leo Horoscope! We’re discussing the episode right now.

And get ready for next week as Kamen Rider Wizard premieres!

Speaking of Kamen Rider Fourze…..The Daily Yomiuri has interviewed Sota Fukushi, who plays Gentaro Kisaragi AKA Kamen Rider Fourze himself! It turns out a talent agency discovered Fukushi through his photos in a hair magazine. If that wasn’t a surprise, it also turns out that prior to auditioning, Fukushi had never watched a Kamen Rider show before!

Nonetheless, he was still able to impress producer Hideaki Tsukuda:

Hideaki Tsukada, a producer at Toei Co., the company behind the TV show and film, was present at the audition. “Fukushi isn’t a calculating person when it comes to his appearance. His manner of expressing himself directly was very attractive. His brilliant smile fit my image of Kisaragi,” Tsukada said.

Though Fukushi had never watched Kamen Rider series before, it turns out, his parents did!

When Fukushi told his parents about passing the audition, they were even happier than he expected. His mother said, “I can strike the [original] Kamen Rider pose,” and then did so. Kamen Rider was the first installment of the series, airing in 1971. Fukushi’s father, a Kamen Rider fan, was thrilled, saying, “This is really excellent.”

His parents’ reactions reminded Fukushi that Kamen Rider is a popular series that has lasted more than 40 years.

“It was a privilege to become a character my parents have followed. I vowed to portray a Rider who can encourage all viewers,” he said.

The article also mentions that Fukushi cannot seriously get angry while performing, which admittedly troubles him a little. With Kamen Rider Fourze wrapping up soon, what do you think of Fukushi, did he live up to his 1st role as a Kamen Rider well?

Welcome to another round of the weekly Let’s Watch Wednesdays At Tokunation.com! This week we go in a different direction, to commemorate the end of Kamen Rider Fourze, which wraps up this weekend! Specifically we will be discussing the following 5 episodes(which in the eyes of the staff here were arguably the most pivotal):

As we draw closer to the finale of Kamen Rider Fourze, a special stage show is currently being held at the Tokyo Dome entitled “Kamen Rider Premier Stage Show ~The Large Cosmic War is Here!~”.

The show also tells the story of previous Riders leading up to Fourze and features past riders No. 1, No. 2, V3, Riderman, X, Amazon, Stronger and OOO! Movie exclusive rider Nadeshiko also appears and Jefusion have also reported the appearance of Kamen Rider Wizard and a mysterious new rider wearing the Fourze Driver.

In addition to the show itself, there is also an exhibition of life-sized Kamen Rider mannequins.

Kamen Rider Premier Stage Show ~The Large Cosmic War is Here!~ will be running until the 19th August. You can see official images for the show on its website and the TV Asahi site, however we’ve mirrored them here along with the images of Wizard and the myserious new rider. Check them out after the jump!

We’ll bring you more news of this strange new form as it comes, but for now check out the image after the jump!

One of the biggest mysteries of this year’s Kamen Rider show, Kamen Rider Fourze, was the identity of one of the Horoscope Zodiarts, namely Virgo. She appeared quite a long time ago but her identity was never revealed…

The 40th episode of the series aired, “Of Values and Passion”, and the fans of TokuNation.com are already talking about it! Are you ready to be spoiled?

If yes, click here and join in the discussion!

Stay tuned as we draw closer to the finale of Kamen Rider Fourze!