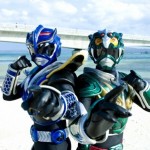 Thanks to our forum member irsyadsway we can tell you that a lesser known tokusatsu known as Ryujin Mabuyer is going to be adapted in Malaysia!

Ryujin Mabuyer follows the adventures of a local hero of the Okinawa Prefecture. A local hero is a tokusatsu hero who is based around a certain region or a certain prefecture in Japan, and tends to be based off local mythologies and industries. They are not as big as Super Sentai, Kamen Rider, Metal Heroes, or Ultraman, but they do have dedicated followings.

Ryujin Mabuyer last saw a theatrical release in 2012, but aired 39 episodes spanning from 2008 to 2010. The Malaysian adaption will be filmed in Japan with many new scenes being filmed, and star a Malaysian cast. The series will air in 2014 at 7:30pm on TV3.