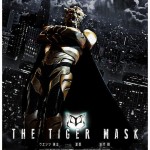 Recently, it was announced that Ken Ochiai’s classic anime and manga: Tiger Mask will be adapted into a live action movie. Actor Eiji Wentz will be playing the lead role as Tiger Mask and the movie also stars Show Aikwa as Mister X, and Natsuna as the heroine Rukino.

The original manga told the story of Naoto Date’s alter ego: Tiger Mask, whom is a feared wrestler in America and extremely vicious in the ring. But after returning to Japan, Tiger Mask meets a young boy that idolized him as a villain, the boy lived in the same orphanage that he grew up in. Tiger Mask is inspired to be a more heroic wrestler.

The movie adaption however, is an origin story that pits Tiger Mask against an evil Wrestling organization. Tiger Mask’s costume receives a modern update, making him look closer to an American comic book super hero.

The film is set to premiere in Japanese Theaters this November, and a brief launch trailer has been released: