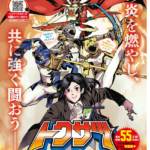 Tokusatsu GaGaGa is an upcoming J-Drama series adapted from the comedy manga of the same name. In it, actress Fuka Koshiba stars as Kano Nakamura, an office worker who tries to hide her obsession with all things Tokusatsu from her friends and co-workers. The J-Drama series will be adapted into seven episodes which will begin broadcasting on NHK network on January 18th 2019 and the first trailer for this J-Drama series was just released online.

No Youtube link at the moment, but we do have a trailer via Twitter thanks to Twitter user @kotoshitoshi, hit the jump here to check it out.