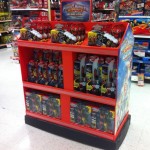 Thanks to raz we now know that Power Rangers Super Megaforce is in stock on ToysRUs.com!

As of this posting, the items are IN STOCK and ready to ship to home!!

These are the same items that have just been released at Toys’R’Us stores.

We will keep you updated! Thanks again to @razzle1337 on Twitter! 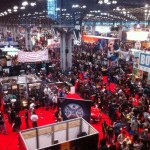 What a day! TokuNation.com had boots on the ground at New York Comic Con 2013 and our crew was busy covering things for us here, as well as our sister sites TFW2005.COM and ToyArk.com. We are pleased to bring you a write-up of all the images of not just Power Rangers, but also from our sister sites showcasing Transformers, Marvel, DC, Mattel, Yes Anime, Square-Enix, and more!

– Captain America: Winter Soldier Toy Images
The next movie in the Captain America series is Captain America: Winter Soldier. Hasbro showed off a few upcoming figures and you can see them here.
– Amazing Spider-Man 2 Toy Images
It’s Spider-Man vs. Electro in The Amazing Spider-Man 2 movie, and Hasbro showed off some of the figures coming out under that line! Check it out!
– Star Wars Rebels and Black Series Toy Images
The next Star Wars property is Star Wars Rebels and we saw our first look at these new figures, as well as figures further along in the Black Series, including Darth Vader! Check it!
– KRE-O Dungeons & Dragons
A ton of new images for the Dungeons & Dragons line under the building construction line KRE-O!
– Kotobukiya Statues from NYCC 2013
The folks at Kotobukiya are at NYCC 2013 and were showing off their new statues of Marvel, DC, Star Wars figures, and even more than that!
– Dark Horse’s Game of Thrones Display
Check out the goodies for Game of Thrones courtesy of Dark Horse!
– S.H. Figuarts Batman
This is one bad-ass looking figure. Continuing on from Iron Man, we got our first look at S.H. Figuarts Batman. It’s amazing looking figure, so please check it out, you won’t be disappointed!
– S.H. Figuarts Dragonball Z
Goku and friends were on display courtesy of Bluefin Tamashii Nations. Check out the display, showing the newer figures of Son Goku and Krillin! (Hey Vegeta! Vegeta! Vegeta!)
– S.H. Figuarts Sailor Moon Figures
For the first time see all five of the Sailor Moon girls on display, including Sailor Venus! These figures are hot!
– S.H. MonsterArts Alien vs. Predator
The movies weren’t that great, but you can make an even better one with these highly detailed S.H. MonsterArts figures of Alien and the Predator! Does not come with Awnahld.
– Pop Culture Shock Toys Statues and Busts
Check out what Pop Culture Shock Toys has to offer with statues and busts of Masters of the Universe, Street Fighter, Mortal Kombat, and more!
– Yes Anime’s Iron Man Super Alloy Display
Wow. Amazing pieces of work for Iron Man fans with 1/4 and 1/12 scale figures with interchangeable pieces. Check it out!
– Yes Anime’s Super Alloy DC New 52 Figures
Check out a selection of highly detailed figures from DC Comics New 52 Universe, with interchangeable pieces!
– Mezco Booth Displays
If you’re a fan of Thundercats, Breaking Bad, Chucky, or Creature from the Black Lagoon, then you need to click this link immediately.
– EnterBay Booth Display Images
Did you buy that highly articulated, life-like Michael Jordan figure? Maybe you’ll be enticed to pick up the upcoming Blake Griffin and LeBron James figures. Images at the link above!
– 3A Legion Booth Display Images
Check out some highly detailed figures that are coming out from the folks at 3A Legion! Some of the images will wow you!
– DC Multiverse, Movieverse, Total Heroes, and More Display
There’s too much to name! If you’re a fan or collector of the DC Comics figures, you MUST click the link above to check out a TON of images of new and upcoming items!
– Masters of the Universe Classics Images
Hey He-Man fans, this link’s for you! Check out some awesome images of some awesome upcoming figures!
– Square-Enix Play Arts Kai DC Universe Display
The Play Arts Kai series is super, SUPER detailed figures, so check out what they have in store for Batman, Superman, ]Harley Quinn, and more!
– Square-Enix Play Arts Kai Video Game Series
Check out some beautiful images of upcoming figures for Final Fantasy, Kingdom Hearts, and Metal Gear Solid!
– Square-Enix Play Arts Kai Robocop and Star Trek Display Images
If your wallet hasn’t killed itself yet, it might after you see these images from Star Trek and Robocop from the Square-Enix Play Arts Kai line of figures!
– Kotobukiya Star Wars Mara Jade ArtFX Bishop Statue
Our guys at NYCC 2013 thought this was one of their favorite pieces of the entire show. Find out why by clicking the link!
– Marvel Now Avengers 1/10 Statue Line Up
Check out this amazing gallery of 1/10 statues of the Marvel Now Avengers!
– Diamond Select Display Images
If you love Mini-Mates, or some of Diamond Select‘s statues and busts, click this link and check it out!

And that’s it for Day One at NYCC 2013. Thanks to our crew on the ground – Tony Bacala, DESTRO, and Sentai Tamashii for all the hard work they’re doing! This is just the first day, we’ll have more stuff for you as the week and weekend roll on!