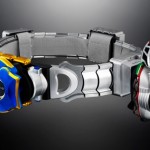 What’s more is that the galleries gives a little insight as to the functionality of the toy: the CSM Gattack Zecter has the same working Clock Up pad from last year’s Kabuto Zecter.

Compression photos between the DX and CSM Hyper Zecters are made, and interestingly enough, the Hyper Zecter will work with both Kabuto and Gatack’s. Hyper Gatack is a form that only appeared once in the Kamen Rider Kabuto Hyper Battle Video

The Hyper Zecter will be priced at 5940 yen while Gatack’s will cost 12960 yen. Both Zecters will ship sometime in February 2016.