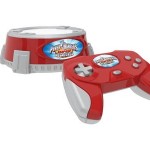 The collectable figurines utilizes RFID chips to scan the Rangers into the game , with the game itself having been worked into the actual controller so a major platform will not be required to play Hero Port.

You’ll be getting Super Megaforce Red and Blue with the game additional rangers can unlocked additiona levels and stages to play through.  The rest of the team will be divided up into sets each costing about 9.99 according to listings from Amazon.uk.