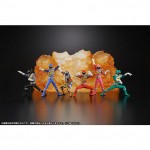 A little while ago, Bandai announced a pricey set of HG Heroes miniatures containing the full set of Zyuden Sentai Kyoryuger.

The set contained five mystery figures, and three of the five have now been announced.

The last one….contains spoilers for the up coming summer movie;

Spoiler:
it is another version of Deathryuger with a different head.

Two different versions of Dogold will also be included with the set, one with and without his furred collar.

The set will be shipping out in November, with the whopping price tag of 26,250 yen.