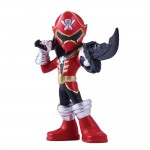 With special thanks once again to Fury Diamond of Samuraicast Blog, we’ve now seen our first official images of the Power Rangers Super Megaforce Mini Figures. They may be mini, but they look super cool – check out the pose of that Super Megaforce Red Ranger! These images were found on Toys’R’Us and these poses seem to mimic the popular poses from Kaizoku Sentai Gokaiger, so these are a great addition for fans of either Super Megaforce or Gokaiger.

Check out the official images of all five Super Megaforce Power Rangers as well as the X-Borg by clicking the story title!

Our good friend Destro did up a few a nice galleries for our Network sites. For Tokunation readers, he did an excellent shoot of the Power Rangers Super Samurai Red Ranger Translucent Mini-Figure as well as a shot of the Red Ranger Mask from San Diego Comic-Con 2012.

Read on to check it out.