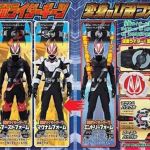 A new round of scans has given us our first proper look at the fourth Kamen Rider of the Reiwa Era– Kamen Rider Geats!

These new scans offer some interesting insights into the upcoming series:

*Geats’ henshin device is known as the Desire Driver. This Driver will have two changeable elements- ID Cores & Raise Buckles.

*The ID Core will be the basic item for any Kamen Rider using the Desire Driver. Using the Geats ID Core transforms the wearer into Kamen Rider Geats Entry Form– which features only the white kitsune mask with a basic black undersuit.

While not fully demonstrated in the available scans, the Raise Buckles are not bound to a single side of the Desire Driver and can be swapped- meaning the Magnum Form can become legs while the Boost Form could also be used on the torso.

Lastly, we have some shots of Kamen Rider Geats Magnum Boost Forms’ signature weapon- the Magnum Shooter 40X! This gun has a standard pistol configuration but extends to a rifle mode for long range attacks.