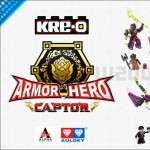 This one is a little bit out of left field! For those who follow various or not-so-known tokusatsu series, the Armor Hero line from China is their own version of Super Sentai and/or Kamen Rider. Recently, the toys have picked up some popularity here in the United States with tokusatsu collectors, with the recent mech being considered a vast improvement from the last few years.

Today, during the Hasbro Investor’s Conference Call, Hasbro revealed that they have partnered with China to develop their line of building toys, known as KRE-O, for the Armor Hero series in China. These toys will be exclusive to China.

While this may not seem like huge news, in a way it is – Hasbro now has its hat in the ring with a tokusatsu series that rivals Bandai and TOEI. With a global partnership like this being created, one has to wonder … if the Power Rangers 2017 Movie is successful, does this partnership leave a door cracked open for potential Armor Hero showing in the United States?

Join the discussion! Special thanks to our sister site TFW2005.COM for the update!