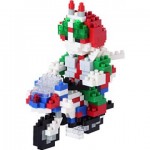 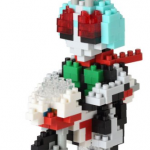 This bit of news narrowly flew under the radar: building Block company Nanoblock will be releasing Kamen RIder themed sets later this month!

Found via Amazon Japan, we have listings for the four main Riders of Kamen Rider Gaim including Gaim himself, Baron, Ryugen, and Zangetsu, with the production images showing that you can replicated the pre-transformed giant fruit on head state somewhat, each Rider will come with his signature weapon.

Also joining the Gaim Riders, we have Kamen Rider 1whom will include enough pieces to build the Cyclone Bike in addition to a set that will include two Shocker Combatmen.

The sets aren’t too expensive with the Gaim riders costing 1680 yen a piece while the Shocker two pack at 1944 yen. Understandably, Kamen Rider 1 is a bit pricer at 2160 yen.

According to the Amazon Japan listings, these should be release on June 30th.