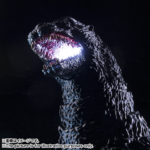 The S.H.Monster Arts line dives into yet another era of Godzilla, this one based on his Godzilla VS Biollante appearance.

But what separates this King of Monsters from previous releases are a few built in features activated via a set of switches built into the figure’s neck: according to the product page the first function activates an LED gimmick which lights up the spines and mouth to replicate the iconic Atomic Roar attack, the second function seems to be a sound feature which plays BGMs straight from the movie.

S.H.Monster Arts Godzilla 1989 appears to be a standard release, and will drop sometime in October 2016.