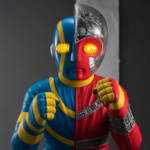 Standing roughly 40cm high, this static figure is a highly detailed replica of the suit seen on the original 1972 show – complete with intricate detail on Kikaider’s exposed mechanics as well as perfectly capturing his iconic red and blue colourscheme. The statue also features light-up brain and eyes, as well as alternate arm parts to display Kikaider in signature “Denji End” finishing move pose.

Unfortunately this statue isn’t for the faint of heart, releasing in July for a whopping 27,000 yen. Though a Premium Bandai exclusive release, the figure is also curiously being released exclusively through Amiami – with preorders on both sites opening tomorrow.

Is your wallet deep enough for this to join your tokusatsu collection? Either way, be sure to check out the full image gallery of this incredible figure after the jump!