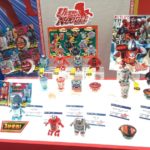 Bandai had a rather unusual reveal for us at the Tokyo Toy Show with a line of various Ultraman characters that transform into containers of cup ramen.

At the moment, we don’t know when this bizarre toy line will be released but at the very least we know they’ll cost a rather affordable 850 yen a piece.

At the same time, Bandai’s youtube channel posted a teaser for the Ultra Noodle Series which you can view in the box below: