Articles Related to VS Vehicles 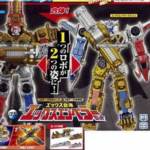 We’ve just seen the first look at the double agent Lupin-X and Patren-X and now we have our first look at his mecha – the X-Emperor! We also get a look at some new VS Mecha that will be joining the team. We have a construction crane that doubles as an arm; a stealth bomber that doubles as a shield; as well as the two core mecha that form the body for X-Emperor’s two forms – one for Lupinranger and one for Patranger.

Click the title of the story for the images. Thanks to @TheRealMattHunt and @SpecialForm12 for sharing the images.