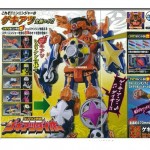 Taking a break from our San Diego Comic Con 2015 coverage we’ve gotten an update to another story from a few days ago. Rumored only days ago, today we have confirmation on the final mecha for Shuriken Sentai Ninninger. Releasing in October is the DX Gekiatsu Dai Oh!

As reported Gekiatsu Dai Oh is a brand new 6-piece combiner for the entire team. Each of the animals it’s composed of feature a hybrid vehicle motif as well as molded in flame details. Consdering Takaharu’s constant state of being “Fired Up” this is totally appropriate! Also as reported Gekiatsu will feature a chest missle launcher activated by a dial gimmick on it’s back. Each of the missles is actually the Ninningers themselves!

So what do you think of this bizarre new mecha? It’s been many years since a full team mecha upgrade like this has happened and it may very well be the first time a 6th ranger has received one and been incorporated in this fashion.