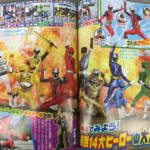 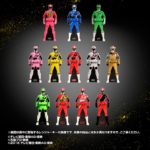 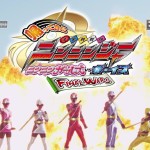 This DVD special will be set two years after the end of Ninninger and feature the team reuniting to prove who has superior Nintality. A new character will be introduced for the film- MidoNinger, the first official female Green Ranger in the history of Super Sentai.

A copy of the movie preview has been uploaded to YouTube- 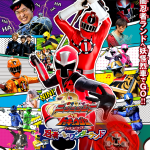 In addition,Toei has opened their official page for this film, revealing a special poster for the teamup.

Ninjas In Wonderland premieres in theaters on January 23, 2016! 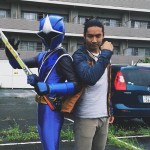 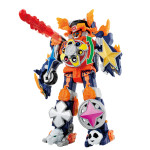 The official Bandai B-Boys website has jut updated with it’s October offerings, and that means it’s time for a brand new official image dump! First up on the list is the DX Gekiatsu Dai-Oh from Shuriken Sentai Ninninger!

DX Gekiatsu Dai-Oh is a brand new 6-piece mecha formed by all 6 Ninningers. The epitome of Takaharu getting “fired up” this set offers a new uniform color scheme not typically present in combiners of this nature, and is unified by flame detailing. DX Gekiatsu Dai-Oh will be released on October 10th! 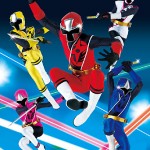 A special new video game featuring the adventures of Shuriken Sentai Ninninger has been released on the Nintendo 3DS EShop!

The game appears to be a basic sidescroller with various combat styles for each Ninninger.

The Ninningers’ 3DS adventures will cost a mere 926 Yen! 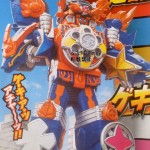 Some new images detailing the final piece of the Shuriken Sentai Ninninger arsenal have been posted online!

This is our best look yet at the mighty Gekiatsu DaiOh, an orange and blue Mecha created by fusing six new Otomo-Nins and taking Nintality to unparalleled levels!

The Gekiatsu DaiOh is set to appear in-series very soon. Be sure to stay tuned to the 39th Super Sentai Series to observe this supreme Ninja Combination! 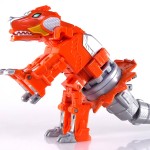 Washoi! The dinosaur Otomonin joins the fray in this years theatrical film Shuriken Sentai Ninninger The Movie: The Dinosaur Lord’s Splendid Ninja Scroll. And not to be left out on the toy side of the things, a special “EX” release has just hit retail for this new ally to the Ninningers with DX Dinomaru!

EX DX Dinomaru is a pretty wild toy. From the ground up this figure is a remold & repaint of the previously released DX Paonmaru, bet you never thought Bandai could get an elephant and a T-Rex out of the same like that? Sharing much of the same transformation as his mold mate, Dinomaru still manages to be new and creative, bringing his own charm to combining with Shurkenjin to form Shurikenjin Dino!

Before you check out our complete gallery be sure to check out the video below to see a full review of EX DX Dinomaru from friend & site contributor baltmatrix!

After checking out the above video be sure to view our full 60 image gallery of DX Dinomaru by simply clicking “Discuss on the TokuNation Forum” at the bottom of this post! And be sure to take a moment to get up to date on our previous Ninninger DX galleries:
DX Shurikenjin[/URL]
DX Paonmaru[/URL]
DX UFOmaru[/URL]
DX Surfermaru[/URL]
DX Bison King[/URL]