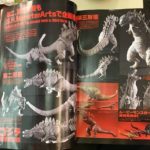 We’ve known for quite some time that the Shin Godzilla film (or as it’s known in the west Godzilla Resurgence) would feature a creature with mutating forms and abilities. But it wasn’t until last month, when images of vinyls for some of these forms surfaced, that we had any idea what they’d look like. Now thanks to a pair of Figure Oh magazine scans hosted over at Steven’s Toy Blog, we have our first looks at S.H. MonsterArts Shin Godzilla’s 2nd & 3rd Forms!

These seemingly diminutive and oddly colored forms look like very different interpretations of Godzilla than we’ve ever seen. Both are very squat and plump, one featuring a mostly beige color scheme while the others’ red coloration seems to be influenced by the “Poster Art Version” of the 2014 Godzilla Monsterarts figure.

What do you think of these bizarre new forms for the 2016 Godzilla? Right now there’s no concrete release information for either of them, but would you be interested in picking such unique forms up? Let us know in the discussion thread below.