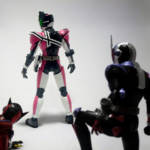 The most recent post on Bandai’s S.H. Figuarts blog cycles through the official images of the upcoming Ride Striker release for Kamen Rider Zi-O. The post details the accessories it comes with as well as it’s compatibility with both Zi-O and Geiz. However, at the end of the post is an odd teaser.

The image attached is of the yet to be released Zi-O and Geiz Figuarts posed as though they’ve just lost a fight, while Decade stands tall in the background, back facing them. This image is very likely teasing something a lot of people have been hoping for since news of Decade’s return in Zi-O was made known. Given his turned back, this could very well indicate a potential reissue of the Shinkocchou Seihou Decade S.H. Figuart, though with the new magenta Neo Decadriver instead.

While there’s nothing more concrete to go on than that, the popular consensus is that we could be seeing the Destroyer of Worlds return to destroy our wallets once more. Time will tell if this is anything more than just a tease, and if it is, we’ll be sure to let you know!