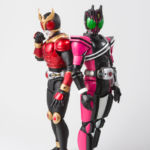 Last week, news emerged that a reissue of sorts was planned for S.H. Figuarts Shinkocchou Seihou Kamen Rider Kuuga. Details had been sparse save from the Decade Version designation it was given. Thankfully a full set of official images has just been released via Tamashii Nations.

S.H. Figuarts Shinkocchou Seihou Kamen Rider Kuuga (Decade Ver.) will be a part for part reissue of the original Seihou Kuuga Mighty Form with some paint differences. The shade of red used on the Decade Kuuga suit is a bit brighter while the gold accents are a bit deeper as well. This reflects the way the original Kuuga suit changed between filming for the Kuuga TV series and the Decade one. Having been repainted previously, in an attempt to color match the suit to it’s original scheme, Toei did miss the mark a little. This resulted in a subtly unique version of Kuuga for Decade, and this figure represents that.

Many collectors who missed out on the original Seihou Kuuga release will undoubtedly be happy to see this unique reissue, allowing them to finally pick the figure up for a reasonable price. Kuuga Decade Version will be out as a retail release in October for 6050 yen, which is still 650 yen more than the original release. No new accessories are included with this release.