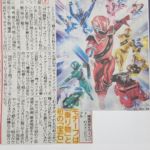 Earlier today, we were given our first look at the mecha that will be employed by the next Super Senai team: Mashin Sentai Kiramager. Some new details have now emerged giving us some plot details of this forthcoming series, with translations courtesy of Twitter user @Ben77878871

The Kiramager will fight against the Yodon Army who is trying to steal hope and radiance from people, with jewelry and vehicles serving as the show’s main motifs.

Mashin Sentai Kiramager will be airing March 8th 2020 though the team will be making their grand debut in a prologue titled Episode 0 that will be airing February 8th 2020 via the Ryusoulger VS LupinRanger VS PatRanger  crossover movie.

We’ll, of course, be providing you with more details about this show once it becomes available so be sure to check back with us in the near future.

Thanks to an update from @Ben77878871,  we now know Hideaki Tsukada, the man behind GaoRanger and various Kamen Rider series will return as chief producer for this series.