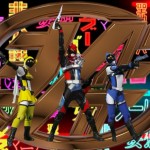 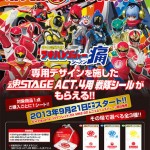 Similar to the Riders on Stage promo awhile back, Bandai is launching a new promotion involving Tamashi Act Stage stands. This time, the give away will be themed around Akibaranger Season 2.

Unlike the last promo however, they will be giving out decal sheets to be applied to Tamashi Act Stage 4 stands.

Any Super Sentai related S.H.Figuarts that was released at mass retail will be eligible for this give away in addition to the Munya Munya Zuban and Moya Moya Z Cune roleplay toys.

The three Akibarangers will be getting their own decals along with TyranoRanger, Hurricane Red, and Ryuranger. Z Cune Aoi will also have her own personal stand and there’ll even be one that has the S.H.Figuarts logo and slogan on it. The promo event will begin September 21st. 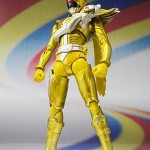 An official gallery has now gone live, and while this maybe the same mould as the mass retail release Cho Akiba Red, the figure has been done up in a shiny gold paint.

Cho Akibared Super is currently slated for release in October, retailing for 3675 yen.

Rounding out the October release schedules is a new version of Figuarts AkibaRed in his newly unlocked golden “Super Mode!”

If you’ve been keeping up with Hikonin Sentai Akibaranger Season 2 then you know this wacky awesome series brings the same level of greatness that the first season did. Including the Inordinate Powers of the official heroes!

Well on display right now at the Akihabara show room are the S.H. Figuarts releases for Season 2’s powers! The Dairen Bomber & Zyuranger Buckler will both come with the Season 2 release of Akiba Blue while the Hurricane Ball will come with Yellow. Apparently no Inordinate power comes with Red as of this writing.

The AmiAmi blog has given us a closer look at the upcoming SH Figuarts revealed by the new episode of Akibaranger!

This includes closer looks at DragonRanger, TyrannoRanger, and the Akibaranger remolds along with our first good look at Figuarts RyuRanger.

Prices & release details for the new items are not yet confirmed so stay tuned for further details! :)

Thanks to the Bandai Tamashii Site for providing us with official images, price, and release info for the Season 2 versions of the S.H.Figuarts Akibarangers!

Accompanying this trio of figures is release info for 3 more figures under the Akibaranger banner!

And don’t forget that Hikounin Sentai Akibaranger Season 2 premieres this Saturday 4/6! Be sure to tune into your favorite fansub groups this week and join in on the delusions! Juu Mosou! 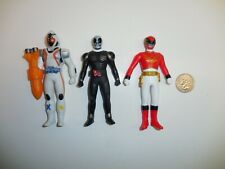 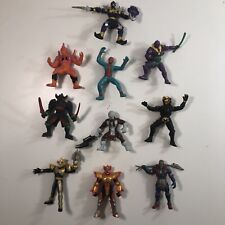 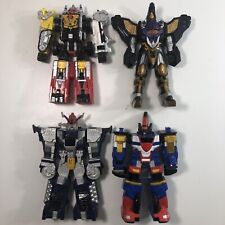