The golden age of poseable Kaiju figures is upon us! Ever since Tamashii Nations made the line transition for Ultraman figures Ultra-Act to S.H. Figuarts the biggest benefactors of that have been Kaiju. Long forgotten in the Ultra-Act line, we now have some really great functional figure alternatives to Bandai’s long line of Ultra Kaiju vinyls. In the spirit of the lines success it’s time to look at an often forgotten Kaiju from Ultra Seven with S.H. Figuarts Alien Metron!

Do you like deadly sci-fi cigarettes? Interested in squid like alien monsters? Well then, Bandai’s got you covered on both counts with Alien Metron. This iconic Kaiju faced off against Ultra Seven in the 8th episode of his own series culminating in the classic table scene with the one and only Dan Moroboshi! This figuart of Metron is probably my favorite of the Kaiju released so far. A figure with tons of personality and display options, Alien Metron will be a great addition to any Ultraman collection.

We’ve attached the full 40 image gallery to this post, but you can check out the full review thread as well by clicking “Discuss on the TokuNation Forums” at the bottom of this post. We’ll be back next time with a Kamen Rider Amazons gallery of S.H. Figuarts Kamen Rider Amazon Sigma! 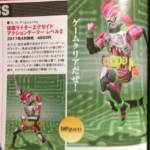