Thanks to our sister site The Toyark for the heads up on NECA‘s latest reveal, Battle Damaged Gipsy Danger from their 7″ Pacific Rim line! Remember that part in the movie when Mako decided to pull out a chain sword to avenger her family? This figure comes with 2 swords!

Also shown is a preview for Sideshow Collectibles‘ Slattern statue:

NECA‘s 1st wave of Pacific Rim Action Figures arrived stateside last month and for those of you looking for more, have no fear! More are coming! MTV Geek has posted an exclusive interview with NECA, and they revealed new figures coming in future waves! Some interesting information was relayed…did you know that the upcoming 18 Inch Gipsy Danger is a nod to the old Shogun Warriors line from the 70’s?! Some Kaiju are huge and would be too expensive to feature in the line, so NECA decided to create figures of Kaiju that were close to their targeted pricepoint. Series 2 will feature:

The rest of the article can be read here! 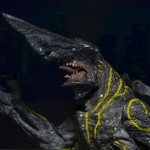 For a while, news on NECA’s Pacific Rim Toyline was pretty sporadic. 18″ figure there, 7″ figure prototype there, et al. However within the last week, there’s been more pictures and information let out. With the movie premiere date coming sooner and sooner, what better time than now to catch up on toy news?

I’ve read comments from folks who’ve seen the new trailers, wishing for toys of various Jaegers revealed recently. Same goes for the Kaiju. In this update we get to see both! Now onto the updates, courtesy of our sister site The Toyark:

Read on to catch up with the images!

Our sister site The Toyark has posted a new teaser image of the NECA 18 Inch Gipsy Danger Jaeger from the upcoming Pacific Rim! The image was tweeted by NECA.

Thanks to Comicguy89 for the heads up. Read on to check out the giant fully articulated Jaeger!

Excited for the American tokusatsu movie Pacific Rim? There’s been some interesting news lately, and we’re here to fill you in! Nothing like seeing some footage so check out the Japanese trailer:

According to NintendoLife, Yuke’s is both developing and publishing the Pacific Rim video game. No word on which consoles but considering the source is a Nintendo site, it could be for the 3DS and/or WiiU.

Thanks to I Am Rogue, we can have a look at the huge banner made for Pacific Rim! 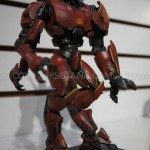 The much anticipated Pacific Rim movie comes out this year, and NECA is one of the license holders producing product. And now thanks to Toy Fair we have our very first looks at some of the toys that we will get to smash our other little toys to bits with. While doing our best Idris Elba impressions.

Series 1 is due in June, while series 2 due in September.

Thanks to our sister site The Toyark for the heads up that the Pacific Rim Movie Facebook page has posted the 1st images of the NECA Pacific Rim Toyline! These highly detailed figures will be on display at Toy Fair 2013, so stay tuned for our images and info!

In the meantime, check out the Pacific Rim Toys by clicking the headline.

Not even 24 hours since the release of the awesome Pacific Rim trailer and the Internet already seems ablaze with excitement and anticipation! This incredible film of Kaiju emerging from a portal in the Pacific Ocean and the giant robot Jaegers built to defeat them, is currently set for a July 12, 2013 release but there’s already plenty to whet your appetite on the official site Pan Pacific Defense Corps such as schematics of multiple Jaegers and even a viral video complete with voiceover by Transformers alum David Kaye.

If you’ve been living under a rock, we here at TokuNation are happy to help out! Check out the trailer for yourself below!

Pacific Rim is directed by Guillermo del Toro and stars Charlie Hunnam, Rinko Kituchi, Idris Elba and Ron Perlman and comes out in what may feel like the longest seven months ever! Stick with us here at TokuNation.com for more Pacific Rim news!