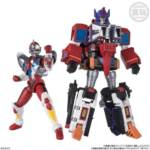 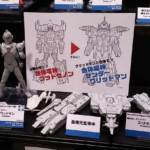 An interesting new release has been teased at this weekends’ Wonderfest 2018 show for fans of Tsuburaya Productions digital action series Denki Chojin Gridman!

This piece from Evolution Toys and their new sub-line known as the Hero Action Figure Series features the Hyper World policeman and his God Zenon Helper Program set, hinting at the possibility of a combination between the two.

Price details are not revealed but Gridman has a tentative release date listed of October 2018.

Feel free to join in our Ongoing Wonderfest 2018 Discussion Thread to share your thoughts on this & all other new reveals! 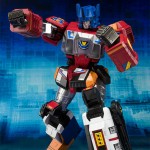 Among several other Tamashii Web Exclusives revealed today the long awaited Ultra-Act God Zenon has finally gone up for order![/URL]

From Denkou Chojin Gridman AKA Superhuman Samurai Syber Squad, God Zenon is a combination of the Thunder Jet, God Tank, & Twin Driller. Though this figure can’t separate into those components it more than makes up for it with what appears to be excellent articulation and some great accessories which include the Dragonic Cannon and a personalized tamashii stage decal for Gridman!

This Web Exclusive figure will be released in March 2014 for 7350 yen. To secure your orders get with your Web Exclusive middleman or service before the order cutoff date! 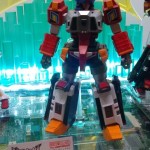 One last series of reveals from Bandai!

Among the various Ultra-ACT Ultraman figures on display was the much-rumored “Xenon” robot from Gridman! Yet another reason to kick some giga-butt!