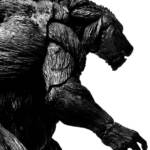 While the S.H. MonsterArts line seems to have slowed down considerably over the past few years, one thing they’ve remained pretty consistent on is keeping up with variants of Godzilla himself. This trend continues in December with the release of S.H. MonsterArts Godzilla 2017, based on the King of Monsters’ appearance in the forthcoming Godzilla: Monster Planet anime from Toho Animation and Polygon Pictures. This version is listed as an “Initial production limited edition”.

Despite preorders set to go up on August 1st Bandai have not yet done a full reveal of the figure, suggesting that a full look at this Godzilla design may still be being kept under wraps for the time being. Nevertheless, the figure will be released in December and retail for 9936 yen. No accessories are listed, but the figure will come with some sort of special card.