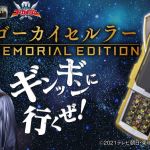 A Memorial Edition release of the Gokai Cellular– transformation device used by Gokai Silver! This new Cellular has been updated with scanning features and sounds to better mimic its television appearance.

This Gokai Cellular will come with five Ranger Keys-

And while the fifth key remains officially hidden in silhouette, fans will instantly recognize it as TwoKaiser from Kikai Sentai Zenkaiger!

The Gokai Cellular Memorial Edition will be released in September 2022! The price is a modest 11000 Yen before shipping and handling. 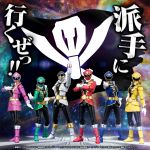 At last we have some official images of the next Shodo SUPER release, based on the 35th Super Sentai series Kaizoku Sentai Gokaiger!

The Gokaiger team is recreated in perfect detail, with all six Gokaigers including their signature weapons- the Gokai Galleon Buster and Gokai Silvers’ Gold Mode.

AND, as a surprise bonus this Shodo set will include some NEW weapons for the Gokaigers! First introduced in the recent 10 Gokaiger reunion film, the Gokaigers activate Cross Armor– featuring new leg cannons for Gokai Yellow & Gokai Pink, a giant five-point sword for Gokai Blue, a massive cannon for Gokai Green & heavy armor for Gokai Red. Gokai Red can also use all five new armaments at once for Full Cross Armor configuration.

This Shodo SUPER entry will be released in two parts: 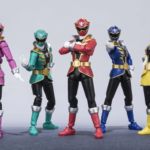 The next entry in the Shodo SUPER adaptation of Super Sentai teams has been revealed!

Just in time for their 10th Anniversary, the Kaizoku Sentai Gokaiger will receive a full release in this new toyline.

At time of writing, exact release details for the Shodo SUPER Gokaiger project have not been confirmed. Stay tuned to TokuNation for more information on this exciting new release! 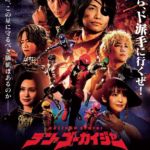 A new trailer has been released for the upcoming Super Sentai reunion film for Kaizoku Sentai Gokaiger!

The new project, 10 Gokaiger features a new event called the Super Sentai Derby Colosseum which features a competition between all the Super Sentai- except one. The Gokaiger team has gone their separate ways until Captain Marvelous appears on Earth once again to issue a Colosseum challenge.

All six members of the Gokaiger team will return for this special, along with series writer Naruhisa Arakawa. Rounding out the reunion will be the original suit actors for the Gokaiger team.

10 Gokaiger is scheduled for a limited theatrical release on November 11 2021 with a DVD & BluRay release scheduled for March 9 2022! 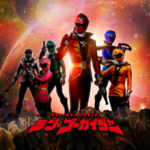 Titled Ten Gokaiger, this new project sees the return of all six Space Pirates for a brand-new adventure.

Ten Gokaiger is currently scheduled for release on March 9 2022! 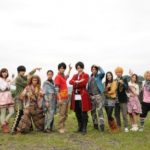 A few weeks ago, we saw a leaked image of Captain Marvelous, leader of the Kaizoku Sentai Gokaiger taken during the filming of Dobutsu Sentai Zyuohger.

Now at last, some details about this pending crossover have been revealed! All six Gokaigers will return once again for a 2-week special in episodes 28-29 of Zyuohger, celebrating TWO THOUSAND episodes of the Super Sentai franchise!

Gokaiger VS Zyuohger will air on September 4th and September 11 2016! Be sure to share your thoughts about this exciting crossover in our Ongoing Discussion Thread! 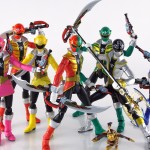 You may recall that on this day last year we posted our very first 2.0 Gallery kicking off our journey of self-improvement of some of our previous works. That gallery was none other than S.H. Figuarts Gokai Christmas! This year we wanted to remind you of this awesome figure on Christmas and also let you know that this gallery is good for an entry in this years Toku Toy Box! As with any other Toku Toy Box eligible gallery you just need to make a relevant (non-spam) post in this thread to give yourself another entry in out giveaway!

For a little refresher on this figure, Gokai Christmas was a special form achieved by Gokai Silver in Episode 44 of Kaizoku Sentai Gokaiger. A Christmas themed episode itself, Silver/Gai sought to be more festive in the battle against Zangyack and so using his special abilities merged the Gokai Red & Green Ranger Keys! The result is this fantastic repaint that was released in 2013 as a Toei Hero.Net exclusive.

Though we’re sharing this gallery once again to celebrate the Christmas holiday, we know that many of our friends, family members, & staff also celebrate entirely different holidays all around the world. We’d like to take this moment to not only wish the community a Merry Christmas but also Happy Holidays! No matter what you may celebrate TokuNation is happy to have you here and we’re thrilled to continue yet another successful year with you. 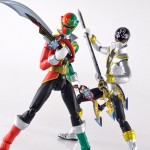 “A holy transformation that happens once a year!” – Gai Ikari/Gokai Silver

Today TokuNation is happy to present a special Gallery 2.0 of a figure released nearly 2 years ago, S.H. Figuarts Gokai Christmas! A limited Toei-Hero.Net exclusive of a one-off form used by Gokai Silver/Gai Ikari in Kaizoku Sentai Gokaiger episode 44. A union of the Red & Green Gokaiger Ranger Keys, this form was Gai’s way of joining in the holiday festivities. We posted up a gallery of this bad boy all the way back in January 2013, but now we can finally give this fantastic figure the time & love it deserves with this full fledged gallery!

Though we’re sharing this gallery to celebrate the Christmas holiday, we know that many of our friends family members & staff also celebrate entirely different holidays all around the world. We’d like to take this moment to not only wish the community a Merry Christmas but also Happy Holidays! No matter what you may celebrate TokuNation is happy to have you here and we’re thrilled to continue yet another successful year with you.

We’re also sharing another installment of our Toku Toy Box Giveaway! Take a moment to peruse the over 50 images of Gokai Christmas after the jump, and be sure to leave a comment in this thread as well! A comment in this thread will make you eligible to win one of our four fantastic Toku Toy Box Prize Packs! Specifically this gallery will put your name in for a chance to win the All Aboard Sentai Prize Pack! That’s our gift to you this holiday season, a chance to win some awesome stuff and join in on the amazing discussions that happen here daily! 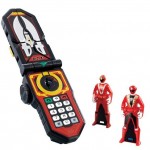 Our site sponsor BigBadToyStore.com snuck a pretty big update in the other day – they’ve got a complete restock on the Bandai Japan line of fan-favorite items from Kaizoku Sentai Gokaiger, aka the Japanese series that Power Rangers Super Megaforce is based on! This includes the Mobirate, the Gokai Cellular, and all the different DX Mechas! Now is a great chance to purchase the Japanese versions of these toys at an affordable price brand new, never opened! Check out the list below!

This is one of the largest restocks for a series that is many years old now! If you’ve been on the fence on collecting this stuff, then head on over to BigBadToyStore.com and order away! And don’t forget to use their Pile of Loot system to help you save on your shipping! 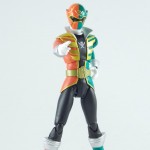 This is by no means a new gallery (Den-O actually did this back on New Year’s Day to start off 2013), but we thought it was fitting today to bring up this gallery and share it with you again. When Ikari Gai – aka Gokai Silver – learned that he had the power to change and combine his Ranger Keys if he concentrated enough, he decided to combine the keys of Captain Marvelous and Doc to create Gokai Christmas, a half-red and half-green Gokaiger!

Click here to check out the gallery! Don’t forget to let us know what you got for Christmas this year! You can find that on-going discussion thread by clicking here! Once again, Merry Christmas to all those celebrating today!