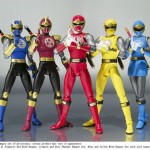 We’ve known for a few weeks that the Ninpuu Sentai Hurricanger 10 Years After V-cinema would feature an evil or brainwashed Hurricana Red. In fact the trailers show the helmet off on his dark costume but not much else. With the films impending release some new images have started circulating featuring the full Dark Hurricane Red costume and the films Blu-Ray/DVD cover as well.

It’s official guys, the special Hurricanger 10th Anniversary project revealed just a few days ago was not an elaborate April Fool’s Day joke by Toei but indeed a reality.

The cast of Hurricanger recorded another video to officially announce the Project as Ninpu Sentai Hurricanger 10 Years After the video can be seen below:
http://www.youtube.com/watch?v=Jf7ZOlZYZzo&feature=player_embedded

The film will be a V Cinema special released on DVD and Blu Ray August 9th 2013 and the official site for the project has just opened.

Thanks to Tokunation board members Banba Soukichi and DrillBit for giving us the heads up! 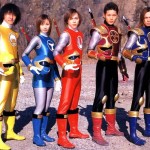 Ninpu Sentai Hurricanger turns 10 years old this year. Producer Jun Hikasa together with actor Yujiro Shirakawa(Whom portrayed Isshu Kasumi/Kabuto Raiger) and the rest of the Hurricanger cast recorded a video announcing that on April 1 2013, a special project will be revealed to celebrate this event.

You can watch the video announcing the project here:

Perhaps we’ll be seeing the launch of Hurricanger in the S.H.Figuarts line? Or the start of a new v cinema film?    Discuss your theory in the thread.

UPDATE:
Those fearing that this might be some elaborate ealy April Fools day prank from Toei, fear not! Thank’s to Drillbit’s sleuthing, we have official Twitter feeds confirming that whatever they’re working on is indeed a reality!