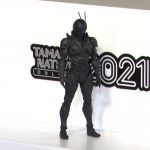 The new Rider design will receive a release in the SH Figuarts line, with this early production image giving us an even better look at the Black Sun suit.

In addition, the Black Sun henshin belt (official name to be determined) will also be included in the Complete Selection Modification series.

Sadly, price & release details for both items have not been confirmed at time of writing. Stay tuned to TokuNation for further updates on this new chapter in Kamen Rider history!