Kamen Rider Hibiki releases have been making their way out much more quickly this year. Just released in September was Kamen Rider Ibuki, we’ve got Todoroki coming up in January 2019, and now we can confirm the release of S.H. Figuarts Shinkocchou Seihou Kamen Rider Zanki in May 2019!

Joining the other Oni of Hibiki, Zanki is another excellent recreation of a gorgeous suit from the series. Zanki includes alternate parts for his Henshin Kigen Onka, 3 disc animals, several sets of hands as well as his trademark Ongekigen Retsurai guitar weapon.

S.H. Figuarts Shinkocchou Seihou Kamen Rider Zanki will be released in May 2019 for 7020 yen as a Tamashii Web Exclusive. Be sure to get in touch with your preferred middleman or service to secure an order.

Yesterday we brought you the news that S.H. Figuarts Shinkocchou Seihou Kamen Rider Ibuki was finally being released, and now Tamashii Nations have confirmed just when you can get your hands on the next Kamen Rider Hibiki Oni and for just how much.

Kamen Rider Ibuki will release in August 2018 as a Tamashii web exclusive, for the price of 7020 yen. Like Hibiki he also comes with a wide selection of accessories, including four additional pairs of hands,  alternate belt parts, his Onibue Onteki whistle transformation device in both folded and unfolded states, 3 different disk animals (in disk form) and of course his signature Ongekikan Reppuu trumpet.

Hopefully this means release information for Kamen Riders Zanki and Todoroki will follow soon! Will you be adding S.H. Figuarts Shinkocchou Seihou Kamen Rider Ibuki to your collection? Let us know in the discussion linked! 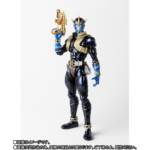 Kamen Rider Ibuki was the secondary rider of Hibiki’s TV series. The youngest of the original 3 Oni of the series, Ibuki abandoned his human name (Iori Izumi) once he gained his powers. This figure appears to gorgeously replicate Ibuki every bit as well as the line did with Hibiki years ago. Ibuki will include his Ongekikan Reppuu trumpet-gun, a set of disc animals, his Oni Whistle for transforming, and several more accessories.

We don’t have the exact release details available yet, but given the release of these partial images, a full set as well as that retail information will be available shortly. We’ll update you as soon as we can! Credit to @_Erasu for digging up these initial images as well. 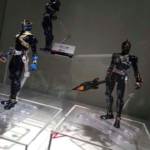 Check out the image by clicking the title of the story. This image comes courtesy of @YongouOYander on Twitter.