As if the announcement of S.H. Figuarts Kamen Rider Kiva wasn’t enough to get you excited, Bandai had one more surprise in store as well! We knew of this item being displayed at the Tamashii Nations 2018 event, but weren’t able to see it because of the annual photo ban on certain items. Now, via SHFindo, we have our very first look at the S.H. Figuarts Machine Kivaa & Parts Set!

Kivaa is of course Kivaa’s stylish personal Rider Machine, and hot on the heels of Kiva’s own announcement, this is pretty exciting. Better still, it looks as though Bandai will be including the iconic Bloody Rose violin as well as the chair/throne Kiva is commonly seen seated in during the OP and in promotional material. While there are no confirmed release details for this set as of yet, one has to assume Bandai would be working on it with the Kiva hype at an all time high. 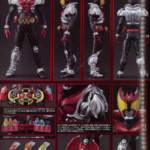 Today represents a monumental occasion for fans of Kamen Rider and SH Figuarts!

Ever since this line of action figures began, one particular Kamen Rider has been noticeably absent from major release. But now, after ten long years of waiting (and meme-ing) the Fangire Hunter Kamen Rider Kiva finally gets his due!

Kamen Rider Kiva’s basic form has been recreated in exquisite details. The figure will include Kivat (his bat-robot sidekick) along with the six Fuestles used in-series to unlock Kiva’s alternate forms & attacks.

SH Figuarts Kamen Rider Kiva is currently scheduled for release in April 2019! The price is a modest 7560 Yen before shipping and handling. 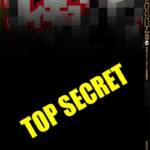 The next issue of Figure Oh has just been teased with a censored cover. With the cover feature being the next S.H. Figuarts reveal for the Heisei Riders Rising Project.

While we’ve been let down many times before, the timing, secrecy, the unseen 20th Rider Kicks ride watch stage that was teased, the massive build up of anticipation, and frankly what is clearly the moon on the background of this cover, would imply that this could very well be the long awaited Kamen Rider Kiva.

There has been no confirmation of this figure’s identity yet, and this is purely speculation based. Your guess will be as good as ours, but our money is on Kiva. Confirmation one way or the other will be made officially on 10/24, when this cover is finally revealed in full.

Let us know what you think it might be, in the thread linked below. Just click “Discuss in the TokuNation Forums” at the bottom of this post. 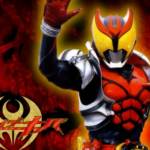 Next year marks the 10th anniversary of Kamen Rider Kiva! And to celebrate this milestone, this monster-hunting series is finally making the jump to Blu-Ray!

Each box is priced at 19600 Yen before shipping and handling.

The Blu-Ray release will also contain a number of commemorative interviews with the Kamen Rider Kiva cast to share their thoughts on this unique series. 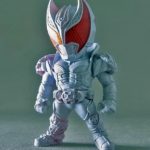 News of Kamen Rider Converge’s next instalment have been making the rounds with several teaser images popped up recently.

First up, we have what appears to be an image of Kamen Rider Kiva in early stages of development, in addition to that we have sketches for G3-X, Chalice, and finally Kuuga Ultimate form though weather or not these will share a case together is currently unknown.

Due note that as that the source of these images is still being tracked down so for now take this posting with a grain of salt, but stay tuned and we’ll bring you more up to date information as it becomes avalaible. 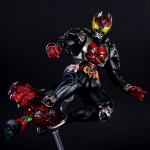 It’s almost Halloween so what better way to celebrate than taking a look at S.I.C. Kamen Rider Kiva so we can all have a little vampire in our Monday mornings? This new look at the classic Kamen Rider Kiva character doesn’t fail to disappoint, and our own photo contributor ryan took over 50 images of this beautiful figure! Do yourself a favor and check it out by clicking here! 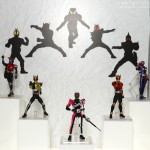 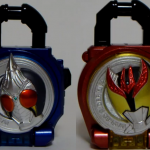 Looks like we’ve got two more awesome Legend Rider Lock Seeds to add to the Kamen Rider Gaim checklist! Youtube user otana7592 has posted up demos of the Kamen Rider Blade & Kamen Rider Kiva Lock Seeds. Each of these new locks is Baron styled and features introductions and sound effects in that vein. Blade shouts “Sword of Spade!” when activated and Kiva is “King of Fangire!” Check both videos out below!