It’s been some time since we’ve stepped back into the world of the dead, so it’s time to pay another visit to Kamen Rider Ghost. I’ve made my thoughts on this line known previously, so I was very hesitant to return to it again. But I’m giving it just one more go with S.H. Figuarts Kamen Rider Necrom!

Necrom completes the trio of riders from the series, so in at least that regard he’s satisfying. But many of the design flaws which plagued the first several releases of this line are still present. Shoulder designs, wrist cuffs, an obtrusive overcoat. That being said, Necrom does look rather good and I do so love seeing full groups of riders together. Though there is a severe lack of accessories with this figure. You can see it all in my full review linked below.

Feel free to browse the full 60+ image gallery by clicking “Discussin on the TokuNation Forums” at the bottom of this post. We’ll be back soon with yet another new gallery from a personal favorite of mine, Kamen Rider Drive! 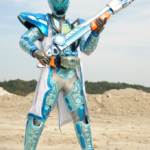 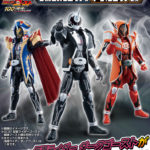 Premium Bandai’s latest Ghost Change release was revealed earlier today, GCPB02 is a set that will contain Dark Ghost along Napoleon and Darwin Damashiis from Ghost’s summer movie. In addition, the set will also come with Necrom’s Gan Gun Catcher  and Deep Spectre’s Deep Slasher, both accessories which were missing from their respective Ghost Change releases.

GCPB02 will be released this January, with a retail price tag of 6,804 yen before any middleman fees and overseas shipping charges. 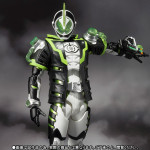 A few days ago the latest batch of toy magazine scans revealed that Kamen Rider Necrom would soon be joining the S.H. Figuarts line. Bandai Tamashii Nations have now followed that up with his official listing on the Tamashii web store, featuring a much more detailed look at the figure.

A Tamashii web exclusive due for release in November and costing 6048 yen, Kamen Rider Necrom comes packaged with just a selection of alternate hands and an additional hood piece.

Will Kamen Rider Necrom be joining your collection? Check out the full image gallery and let us know after the jump! 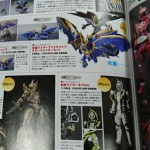 Scans from the latest issue of Figureoh magazine are starting to circulate, and we finally get our first look at S.H.Figuarts Necrom! Surprisingly, Necrom will be in fact a Tamashi Webshop exclusive release. Not much is shown in the way of accessory count, though we do know he will be released November 2016 retailing for 6048

In addition to that, we have the accompanying piece  to S.H.Figuarts Knight Survive with Darkraider also having been shown in the same scan. Like previous bike releases as of late, it seems that there’ll be two option’s avalaible: you can get the bike on it’s own for 11,880 yen, or together with Knight Survive if you don’t already own one in a two pack for 16,200 yen before shipping and middleman fees. Either way, both will be out in August. 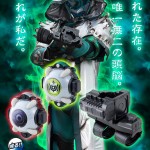 Premium Bandai has put up a new page revealing something special for Kamen Rider Ghost collectors: the DX Proto MegaUloader!

This device, a black recolor of the henshin device used by Kamen Rider Necrom is seen in-series as a new power source for the Superior Ganma. The Proto set will include the device and two unique Eyecons– one containing several Ganma sounds and one that fans will recognize as the personal Eyecon of Superior Ganma Igor– the scientist currently using the Proto MegaUloader.

The DX ProtoMegaUloader will be available in June 2016 for the relatively affordable price of 6480 Yen. Only 6000 DX sets will be made! If you are interested in purchasing, please consult your preferred Premium Bandai retailer. 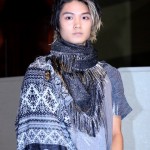 Some time ago we reported that a series of special episodes would be included on the Kamen Rider Ghost Blu-Ray releases featuring the Ganma Prince, Alain (and yes, that does appear to be the official spelling of his name).

The title for this 4-episode special project has recently been revealed: Legends of the Hero Alain and a trailer has been posted online:

The story will follow Alain as he learns more about humanity in an effort to determine the Ganma’s future.

Legend of the Hero Alain will be released with the Kamen Rider Ghost Blu-Rays on April 13, 2016! 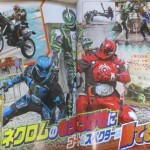 The latest round of magazine scans offers fans a plethora of new details about the future of Kamen Rider Ghost!

Items of note include:

*The next spirit to join Ghosts’ arsenal is the Himiko Damashii! The shaman queen brings a new level of power to Takeru.

*Kamen Rider Necrom is shown in great detail, having already obtained two Damashii for his personal use: Grimm and Sanzo!

Definitely some exciting times ahead for Kamen Rider Ghost! Stay tuned to TokuNation as we keep you up to date on all ghostly details. 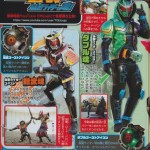 A plethora of new Kamen Rider Ghost magazine scans have been posted online! These give us some remarkable details about the future of this haunted hero!

*First up, we have an up-close look at Kamen Rider Ghost Tokon Boost! This blazing red Damashii marks a new stage in power for Takeru, and its weapon- the SunglassSlasher uses a super-strong finishing move nicknamed Mega Omega Shine. In addition, Kamen Rider Ghost will receive two new Damashiis thanks to Tokon Boost: Goemon and Ryoma!

*The third challenger for the Eyecons, Kamen Rider Necrom is fully revealed! Instead of the familiar Ghost Driver, Necrom’s transformation device is a wrist-mounted Changer known as the Megauloder. The identity of this new Rider is sadly unknown at time of writing.

Last but certainly not least, a series of Kamen Rider Ghost special episodes will be posted on Toei’s official Youtube channel to celebrate Kamen Rider’s 45th Anniversary. Ghost & Specter will each be receiving Legendary Rider Damashiis!

*The first special, Drive Chapter will be released on January 15 2016 and feature Kamen Rider Ghost Drive Damashii fighting the Heart Roimude.
*The second special, W Chapter is set for release on January 29 2016 and focuses on Kamen Rider Specter W Damashii VS the Terror Dopant.
*The third (and believed final) special, Gaim Chapter is scheduled for February 12 2016 and will see Ghost Gaim Damashii face off against Lord Baron.

Definitely some exciting times ahead for Kamen Rider Ghost! Stay tuned to Tokunation as we keep you up to date on all Ghostly details! 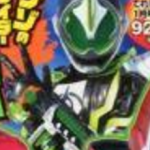 After some toy teases and speculation we finally have our first look at Kamen  Rider Ghosts’ 3rd rider, Kamen Rider Necrom!

Revealed in only a tiny portion of a magazine cover, Necrom is mostly obscured by Ghost Tokon Boost. Though his identity is currently unknown, one cant help but see some minute similarities between Necrom’s design and that of the Superior Ganma.  The popular speculation is on the mysterious Alan being Necrom, but it’s anyones guess right now! In any case we should know fairly soon just who this rider is.

Join in on the discussion of all news & rumors for Ghost by clicking “Discuss on the TokuNation Forums” at the bottom of this post!