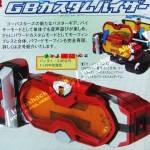 These are some recent catalog scans showing off the last wave of toys for “Tokumei Sentai GoBusters!”

*GB Custom Visor, the device the GoBusters will use to access “Powered Custom” Form 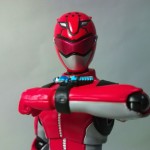 Check out Hima’s photos after the jump!

As Tokumei Sentai Go-Busters continues its retooling, scans from this month’s Televi-Kun magazine reveal that October will see the unveiling of two new additions to the Go-Buster arsenal that were first teased a few months ago.

First is the Go-Busters upgrade form, which is known as Go-Busters Powered Custom. This form can be accessed via the use of the GB Custom Visor and that their Buddyroids are transformed into data that will transform into the armor.

Secondly comes the brand new Buddyzord, LT-06 Tategami Lioh! It’s vehicle mode – a three wheeled bike named the Super Speed Formation, serves as transport for Go-Buster Ace. To pilot the zord, a new weapon named the Lion Blaster will be introduced into the show. It can change into three modes, Lion Blaster Mode, Cockpit Mode, and Attache Mode. When combined with the Sougan blade, it becomes the Ichigan Buster Special Buster Mode.

When combined with GT-02 and RH-03, the three mecha form Go-Buster Lioh! When BC-04 and SJ-05 are also added into the mix, the powerful Go-BusterKing is formed!

More scans from the third-quarter toy catalogues have revealed further Go-Busters news. As well as a new Buster Machine and combinations, it seems our heroes will also be receiving an upgrade/super mode in future episodes.

This mode, known as Go-Busters Powered Custom, will accessed by the GB Custom Visor – due for a toy release around October/November.

Check out the full-size pics after the jump!

Ah the glory days of your wildest fanfiction dreams come true! Super Hero Taisen, the wild and crazy movie that pitted all Kamen Riders against all Super Sentai is set to release on October 21st, 2012 on both DVD and Blu-Ray according to Amazon Japan. Pre-orders are being taken as we speak.

Don’t miss out on owning this once-in-a-lifetime movie!

Among all of today’s Kamen Rider Wizard news, there was also a fair share of Go-Buster reveals! Featured in issue of Televi-kun magazine were images of the buddyroid Enetan, FS-0O, Go-Buster Kero-Oh and the Epsilon type Megazord from the forthcoming Protect Tokyo’s Enetower movie.

On the series side of things, there was also an clear image of Great Go-Buster and the reveal of a brand new character!

We’ve kept the identity of this new character a secret for now, but you can check them out, along with the rest of the images after the jump!

Following the announcement earlier this week that Bouken Red of Boukenger and Red Buster of Go-Busters Figuarts would be released in September, Bandai’s tamashii website has updated its Figuarts section with full galleries for each figure. Both are priced at 3675 yen.

Check out the images and prepare yourself for the incoming preorder slots after the jump! 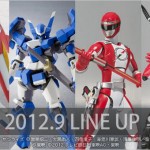 Bandai’s Tamashii website has posted a teaser image for its September lineup, and alongside the previously revealed S.H. Figuarts Bouken Red of GoGo Sentai Boukenger is the long awaited Red Buster of Tokumei Sentai Go-Busters!

Check out the images after the jump! We’ll keep you updated with more details of these two September releases as it comes!