Ravi Shaw was meant to be a Power Ranger. Selected & trained by Grid Battleforce, Ravi earned his place & his power with his teammates. But before they could become Rangers, Blaze & Roxy became something else. Loyal Avatars of Evox! Ravi’s former comrades would have done the same to him too if not for the intervention of Devon Daniels & Zoey Reeves. Joining his new allies, Ravi’s body is infused with Morph-X energy as well as gorilla DNA, turning him into the mighty Beast Morphers Blue Ranger!

Joining the likes of the Beast Morphers Red & Gold Rangers, the Blue Ranger is the third member of his team to make it to the Lightning Collection. With the evil ranger Blaze coming up in Wave 4 of the line, this group of characters continues to expand as well. As is, the Blue Ranger is another welcome member of the team! Packing a (literal!) punch, the Blue Ranger includes two effect parts as well as the Beast-X Saber and even a civilian head featuring the likeness of Ravi’s actor, Jazz Baduwalia!

Check out the full 60+ image gallery of the Beast Morphers Blue Ranger after the jump. Just click “Discuss on the TokuNation Forums” at the bottom of this post to be taken to the full gallery & review thread. And remember that commenting in this gallery thread will qualify you for one (1) additional entry in our annual Toku Toy Box giveaway! Offical rules HERE.

Another month has come & gone and so we have a number of toy galleries and in depth reviews by our Photo & Content staff to round-up once again! Though all the products we reviewed this past month were released in the last 3 or 4 years, the content they covered spanned decades. A selection of Ranger Keys took us down the path of Metal Heroes from 1982 all the way to 2012, the Legacy line gave us a one-two punch throwback to 1994 & 1995, and we caught up with some much needed gallery 2.0’s a recent and often overlooked sentai.

The TokuNation Gallery 2.0 initiative slowly marches on! It’s been a while since we posted one of our updated looks at a figure gone by. But today we’re back with the third in our series of do-overs for Tokumei Sentai Go-Busters with S.H. Figuarts Blue Buster!

First things first, Blue Buster is basically identical to the previously released Red Buster. The only mold difference is the helmet. If you have experience with this mold then you know it well. Admittedly it’s not perfect, there’s limited upper arm movement & especially difficult to swap hands. But Blue Buster is still a more than serviceable release with a great selection of accessories including the Sougan Blade, Ichigan Buster, & the combined Ichigan Buster Special Buster Mode! If you’re looking for another addition to your sentai figuarts display, this one is both inexpensive to acquire and still pretty great despite it’s flaws.

We’ve attached a selection of images to this post, but the full 40 image gallery is view-able after the jump. Just click “Discuss on The TokuNation Forums”. We’ll be back in just a few days with yet another Go-Busters gallery 2.0 with S.H. Figuarts Gorisaki Banana! 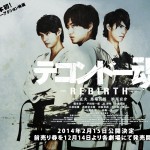 Those in the fandom might recognize the actors for their respective roles as Kamen Rider Decade, Blue Buster, and Gosei Black.

The film’s over a feud between three brothers played by the Toku alumni over whom will be the new master of a taekwondo dojo. But one day, the trio wander into a mysterious forest where they’re attacked and to survive the brothers must rely on their skills and training.

The film has other recognizable Toku actors including Rina Koike(Shizuka Nomura from Kamen Rider Kiva) and Renji Ishibashi(Eijiro Hikari from Kamen Rider Decade)
Taekwondo Damashi Rebirth is set to premiere February 15, 2014 and the first trailer can be seen in the box below:

Toy blogger Shishioh returns with another extensive picture review, this time of the recently released SH Figuarts Blue Buster. This figure was a Tamashii web exclusive and the final of the three main Go-Busters to be released.

Check out a selection of the review after the jump, including images using various effects parts and a recreation of the Go-Busters’ battle with Basco from Gokaiger vs. Gavan!

Thanks to Tokunation member Christian Prime for sharing!
Next Page »