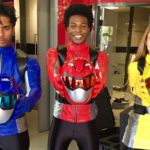 Ever since the first Power Rangers Beast Morphers trailer aired, fans have been clamoring for more and a new trailer finally made it’s debut on T.V today.

The following video was found on Instagram by user Kevstar92. While the recording isn’t the best quality, we can see lots of original new footage including our first look at the team’s morphing sequence.

Power Rangers Beast Morphers will be airing on March 2nd, 2019 on Nickelodeon in the meantime, you can check out the trailer by making the jump here.