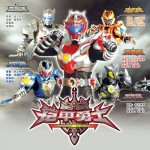 In a time where subtitles seem to rule, it’s rare to see anything tokusatsu related dubbed, or at least, dubbed in a way that doesn’t make you cringe and cry out for pain killers. As some of you may already know, there’s an on-going Chinese tokusatsu titled Armor Hero of which the latest series Armor Hero XT is airing now. However, whether to gain exposure to their tokusatsu series or simply in a gesture of good will, the Armor Hero series (the first one) is being released, officially, with an English dub via an official YouTube channel.

Click here to check out the YouTube channel which is releasing full, dubbed episodes periodically. By going to www.ArmorHero.com, you are taken to the same YouTube channel where, as of the time of this news post, you can watch the first 9 episodes fully dubbed in English.

What do you think? Do you prefer sticking to subtitles? If this proves to be popular, is it a possible sign of things to come in the future, maybe from TOEI? Sound off!