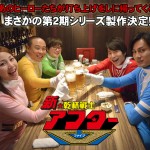 Last year’s Super Sentai parody show: Kanpai Senshi After V will be returning for another season.

Details on this upcoming season are currently sparse, though we know it’ll air sometime in 2015.

Revealed less than a month ago, it’s time for our first in action look at the upcoming tokusatsu parody series Kanpai Senshi After V!

After V follows the exploits of the Golden Warriors Treasure V and what they do “after hours” after a long day of fighting villains.Check out the promo below and catch this new series premiering April 7th! 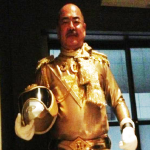 By now you know that Kanpai Senshi After V will be a Super Sentai parody in the same vein as the awesome Hikonin Sentai Akibaranger. It follows the Golden Warriors Treasure V in their off time exploits of drinking and palling around after a long day of fighting villains for justice.

Well it looks like our 5 main heroes weren’t the first and only ones to protect their world! Revealed today is the veteran hero of the team, the appropriately named, Treasure Gold! Treasure Gold will be played by Kintaro Hara who doesn’t appear to have any previous toku roles to his credit.

Also some additional scans from the upcoming series have surfaced showing the Treasure V members hanging out and having drinks, doing karaoke, and just generally having fun after hours. We also get our first good look at the henshin brace used for this show, which is very reminiscent of 70’s/80’s sentai  like the costumes themselves.

Kanpai Senshi After V will begin it’s televised broadcast April 7th 2014. Here’s hoping the usual sub groups decide to pick this one up! 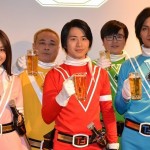 Kanpai Senshi After V is a new Sentai parody show about what a Super Sentai team might do after a long hard day’s work of fighting evil. The show focuses on a team called Golden Warriors Treasure V, during the day they fight off the forces of evil but at night they crash at a local bar and bicker with one another.

The series stars Toku alumni Murai Ryota(Alternate Kuuga from Kamen Rider Decade) as the Red of the team in addition to Kato Kazuki(Kamen Rider Drake and The NEXT V3) as the blue ranger.

While faces new to our fandom include actress Kikkawa Yu playing the role of Pink, Buffalo Goro A as Green, and Comedian Tobinaga Tsubasa in the role of Green.