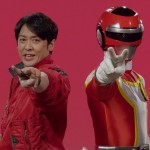 Actor Kenta Sato, Red Turbo from Kousoku Sentai Turboranger, recently caught the latest episode of Zyuden Sentai Kyoryuger. Noticing the preview at the end for the Zyuranger/Abaranger/Kyoryuger team-up movie he took to twitter[/URL] to ask Toei to make a car themed sentai special as well! The other two car sentai of course being Gekisou Sentai Carranger & Engine Sentai Go-Onger.

Something like that happening isn’t entirely likely but it’s fun to see how pumped previous sentai actors can be when watching new series. For instance after their cameos in Gokaiger, Ginga Red (Kazuki Maehara) & Black Knight Hyuga (Teruaki Ogawa) from Gingaman started a twitter account for previous sentai actors to catch up with one another. It went viral very quickly and resulted in tons of actors requesting cameos in Gokaiger and volunteering to do it for fans. In fact that twitter account is what led to so many previous actors returning in the later half of the show. Could something like that happen again? Here’s hoping for a Turboranger/Carranger/Go-Onger special!