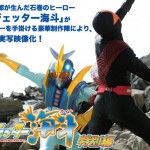 Do you need a dose of new Toku in your life? Well here it is! In the 70’s Shotaro Ishinimori created a rough sketch and background for a new character called Tetsu Majin Shadoru for a TV series. Eventually this design morphed into what came to be Chojin Bashan from the Chojin Bibyun TV series.

In 2004 the Ishinimori Manga Museum created a full suit out of the original unused design to have on display and dubbed it Sea Jetter Kaito! The design was popular enough that a short manga was launched and Kaito became the local/regional hero of the Miyagi Prefecture! That popularity lead to the Ishinimori Museum creating this full live action film of the character titled Sea Jetter Kaito! It will be exclusively shown at the Inshinimori Manga Museum beginning March 23rd.