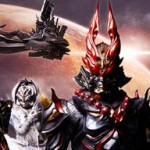 When the current series of Garo finishes a new independent tokusatsu will be taking it’s place in the same time slot, ShouGeki GouRaiGan! We reported about this series previously and thanks to today’s press conference we can finally confirm some more details of what’s being billed as a romantic comedy tokusatsu! And if you were a fan of such off beat shows as Kamen Rider Hibiki, Daimajin Kanon, or Garo then this is absolutely the show for you!

Some toku alums joining the series are Shinkawa Yua (Pink Buster) as Hitomi, Yamamoto Shouma (Kamen Rider Saga/Dan the White Knight) as Gan, and Toshihide Wakamatsu AKA Black Condor from Jetman! Read the full Rising Sun article to get the complete rundown on the series!