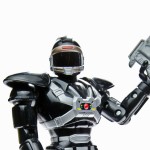 In celebration of the Power Rangers and their anniversary season, our very own conundrum is taking you back in time so you can Shift in to Turbo with a look at an older figure – the 8 inch Quick Draw Phantom Ranger figure!  For those of you who remember Power Rangers Turbo, the Phantom Ranger was an ally to the Power Rangers.  He would appear in both Power Rangers Turbo and Power Rangers In Space, but his true identity was never revealed (but the speculation runs rampant to this day).  If you’re more a fan of the Sentai side of things, then you recognize the figure as the VRV Master from Gekisou Sentai Carranger, an ally but not an official 6th Ranger to the team.  Unfortunately, due to his lack of an appearance in Kaizoku Sentai Gokaiger, the probability that he appears in Power Rangers Super Megaforce is slim, as his costume was never seen on set.

So we’ll celebrate him right here!  Take a trip down memory lane and click the discussion link at the bottom, or simply click here to see the full gallery!